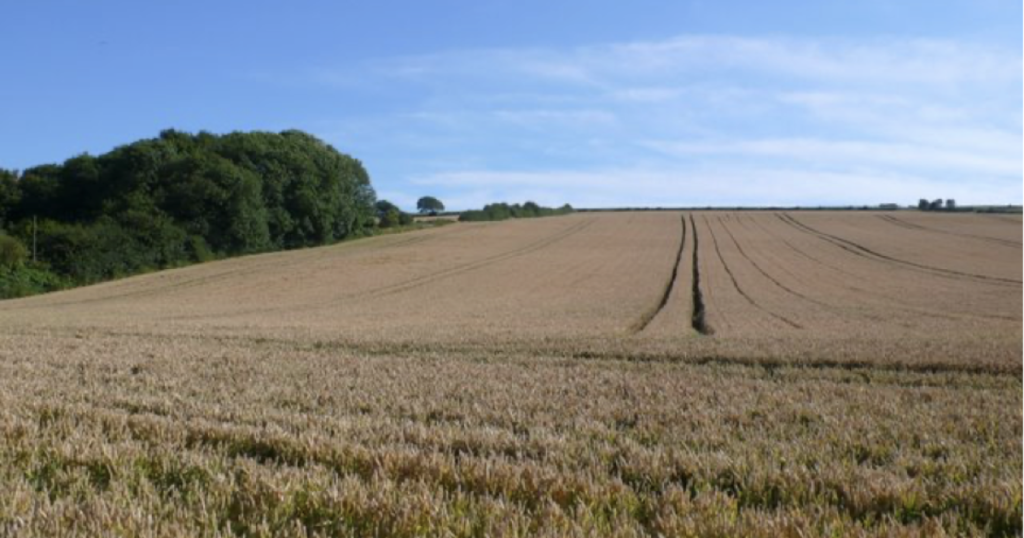 Non-GMO Wheat field at Upwey – In 2021 the government gave the green light to GM open-field trials of ‘low crylamide’ wheat and already this year we could see open-field trials of experimental GM Barley and its interaction with soil fungi if given the go-ahead. Deregulation will undoubtedly see an explosion of applications for genetically engineered ‘open’ trials.

An urgent issue for women today is the UK government’s proposal to deregulate genetic technologies in agriculture. The first step has now been taken that will allow GM open field trials with fewer risk assessments or consents .

Women matter when it comes to the genetic modification of our crops in the farming industry.  We are the principle providers of the food and nourishment that we give to our children. We have direct buying power to make a difference and a campaigning record that has changed the direction of politically charged issues.

It isn’t just a matter of the quality or safety of the GM crops themselves, but the result of patented seeds means seed sovereignty is lost. There are also direct negative impacts on our environment, such as increased use of herbicide in our atmosphere, rivers and soil and loss of biodiversity causing an imbalance in our vital eco-system.

There is also the emergence of superweeds as a result of genetic modification of crops. Other non-target pests have also surged and farmers are driven to use more and stronger pesticides in contrast to industry claims that GM crops need less. Our insects and bees are facing extinction and GM crops have been shown in ‘real-time’ to increase herbicide use rather than decrease it.

We have heard about climate change in farming linked to methane and nitrous oxide but farming using pesticides affects our atmosphere too. For example, in America this has been seen with rain falling from the sky containing glyphosate.  Pesticide also  affect the soil’s ability to sequester carbon. 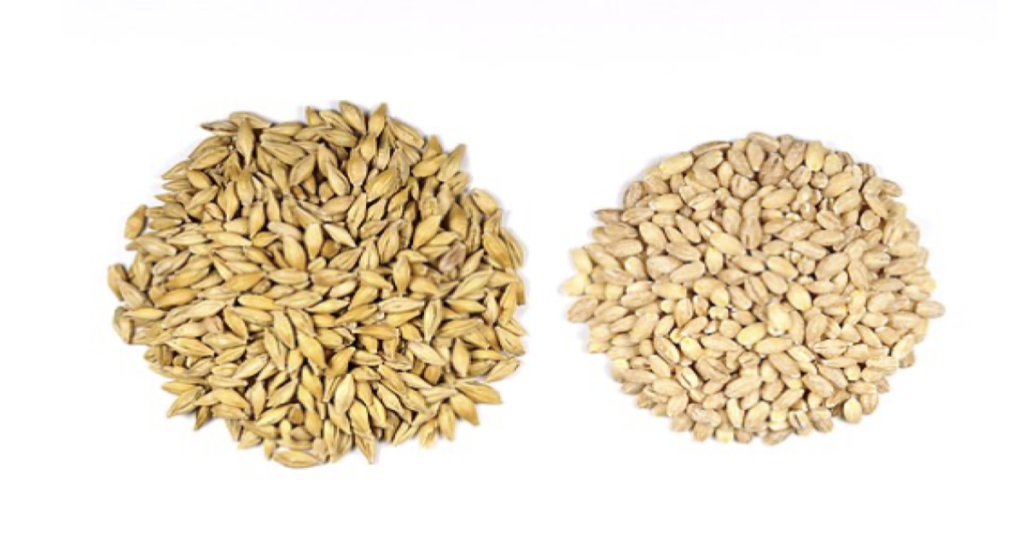 Dr Vandana Shiva has fought tirelessly over the years in India and around the world for retaining food sovereignty and is one of the founders of an organisation called Navdanya which promotes biodiversity, seed saving, food sovereignty and farmers’ rights.  It works at a national and international level and is responsible for forming the declaration ‘Diverse Women for Diversity’.

GM technologies can be patented.  Seeds become the property of the corporations by way of their material transformation. This in turn reduces biodiversity and the natural reproductive ability that traditionally allows free seed sharing.

An important contradiction is now being noted by think tanks and other NGOs about the attempt to frame some GM technology as ‘equivalent to natural breeding’ and that is, if it is truly equivalent to natural breeding techniques then these seeds should not be patented.  As the Royal Society notes: “If some GE products are not treated as GMOs, then they should enjoy no greater intellectual property protection than the products of traditional breeding technologies”.

The organic food industry is a huge success story and has been steadily on the rise in the UK.  According to the Soil Association’s Organic Market Report, 2020, the organic sector growth is now out-stripping the non-organic sector with a 12.6% growth in sales in 2020. People are beginning to show their choices with buying power.

Court cases have been taken by farmers in the past who say GM seeds have blown onto their farms and contaminated their crop.  In 2016 an organic farmer in Western Australia lost his case against his neighbour farmer whose genetically modified canola blew on to his land and resulted in the loss of organic status for 70% of his farm.  The UK is a tiny space compared to the USA and Australia and therefore has greater potential for cross-contamination. 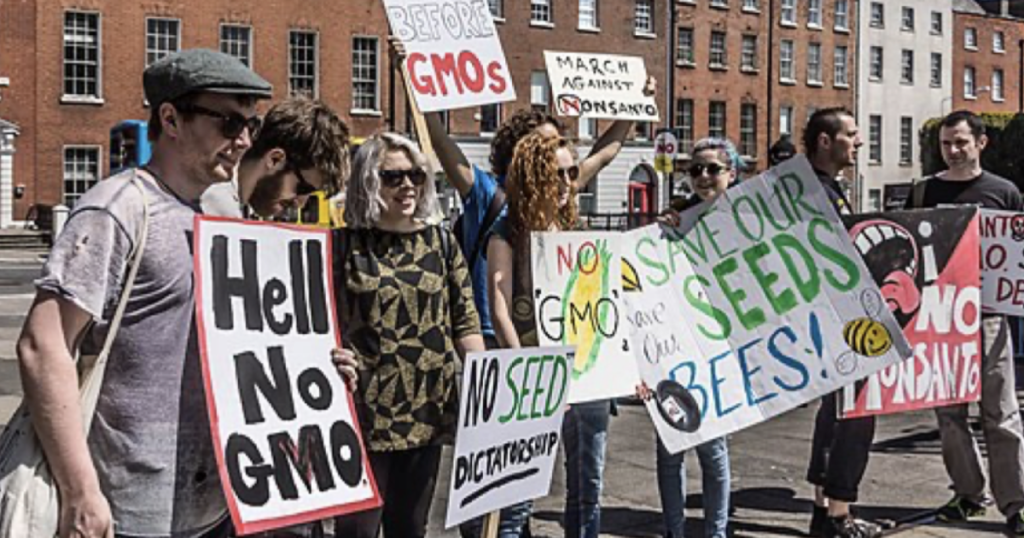 Protesting in Dublin against genetically modified foods. There have been mass worldwide yearly protests against GMOs and more localised on-going objection.

GM and What the People Really Want

Over twenty years ago there was a government report conducted by the Select Committee on Sciences and Technology to find out how the public’s perception of GM could be altered. Overall the report indicated the need to work with the public in the future and to take on board their concerns by recognising people’s values and “making policy which comes near enough to satisfying the values of enough people to command support.”

Fast forward to 2021 and the DEFRA public consultation on the ‘regulation’ of GMOs. This found, once again, that public opinion is still wary of genetic modification and gene editing and that more scrutiny rather than less is wanted.

Despite the high numbers that responded against deregulation the Department for Environment, Food and Rural Affairs (DEFRA) Minister, George Eustice, dismissed this because they came from “a single campaign or lobby group.”  Even with “culling” of the campaign responses, an analysis of the consultation ‘Filling in the Blanks: What Defra Didn’t Say’ shows 85% of responses were against deregulation’ Nothing seems to have been learnt over the past twenty years in terms of connecting with the people on GM food. Media silence has not made the issue any less contentious.

With the deregulation of GM crops comes ever greater danger, from complete contamination of all UK crops and greater pesticide use to loss of our seed sovereignty due to the patents that accompany GM/GE seeds. It can also make labelling of genetically modified food difficult if the government goes ahead with changing the definition of a GMO.

Confusing techniques to change definitions does not help matters. Claiming gene editing has equivalence to ‘conventional breeding’ could lead to dispensing with both regulation of trials and the need for labelling of food using some forms of genetic engineering. The European Court of Justice, however, makes it clear that gene editing falls under the same obligations laid down by the GMO Directive.

The Government’s lack of detail put forward in their draft regulations to the House of Lords on the release of GMOs in field trials was described as ‘astonishing’.

The Lords found that the plans offered no guidance on the criteria by which modified plants would be judged safe to release outdoors and that such important policy changes on GMOs are being dealt with by secondary legislation rather than a Bill which would have then allowed for ‘thorough’ and ‘robust’ scrutiny. Despite this the government’s first steps to create a new story that suggests some GMOs could have been ‘created naturally’ has passed the first hurdle.

What can we do? Getting familiar with GM

Find out what genetic engineering really means for you, your family, the eco-system and the wider environment.  Some links below provide in-depth information on the issue.

Write to your MP to object to deregulation of GMOs in the UK.

Use your buying power and write to your supermarket and tell them you will no longer buy food from them if they accept labelled or un-labelled GM/GE products. Ask your supermarket not to accept meat or milk from animals fed on GM animal feed.

Join a seed-saving network or start your own!

Read Rachel Carson’s Silent Spring to get some background on pesticides. It is available at most large bookshops.

And, of course, get familiar with the ‘Feminist New Green Deal’! 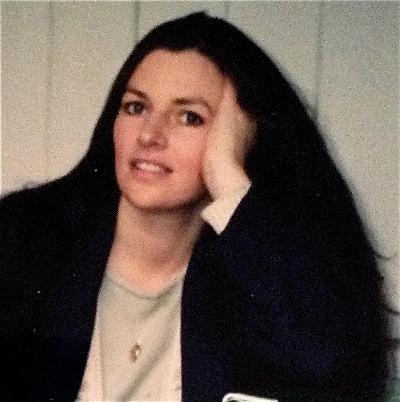 Jan is a journalist and writer. Her blog can be here.

Note:  genetic modification is where foreign DNA is introduced into the gene editing, also known as genome editing, a technology that allows scientists to add, remove or alter an organism’s DNA.  Genetic engineering – a term covering both techniques

Sources and Links for further information:

GM Freeze and Beyond GM Briefing on key issues in the deregulation of genetic technologies: https://www.gmfreeze.org/publications/political-briefing-key-issues-in-the-deregulation-of-gene-editing/

Find out more about Just FACT