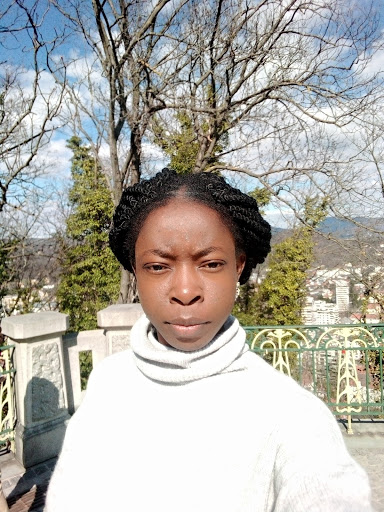 Oladuso Adenike is a youth activist from Nigeria who goes by the name, The Ecofeminist. A large part of her work is around spotlighting the humanitarian crisis in the Lake Chad region in Africa. Lake Chad is a freshwater body that once supported the livelihoods of around 30 million people across four countries. Climate change has led to it rapidly shrinking, resulting in what the UN calls one of the most unique, complex, and severe humanitarian crises in the world. Oladuso is bringing attention to the crisis through her blog, writing on Medium, and creating a Youtube channel. She was named by the BBC as a key African activist and spoke at COP25.

Oladosu talks about the severe impacts of climate injustice on women and girls and underscores that an ecofeminist understanding of the problem, and its solution, is essential.

Thanks so much for speaking with me, Oladosu. You describe yourself as an “eco-feminist”, what does eco-feminism mean to you?

And is it important for you to identify yourself as an ecofeminist?

Yes. I am an unapologetic ecofeminist because I’ve seen, whenever I bring up the issue of women being the first victim in every environmental crisis, a lot of resistance.

I call myself an unapologetic ecofeminist because here some schoolgirls were kidnapped [by Boko Haram militant group in 2014] and this kidnapping is linked to the environmental crisis that is happening in the North-Eastern part of Nigeria close to Lake Chad [where environmental instability has led to armed conflict, displacement, extreme poverty, vulnerability to insurgent groups]. So, you can see the influence of the environment on girls’ education – that they have to be deprived of their educational rights. That is the scenario that led me to become an ecofeminist.

I have written an article on why we should all be an ecofeminist. This world needs people to stand up for women’s rights. There are traditions, norms, beliefs, and other factors that impede women’s full participation. We need to make people understand that feminism is not just for women, it’s for every person to demand women’s rights because women have always been left behind and this is affecting them educationally, health-wise, socially, and in every other aspect of their lives. We need to be taking them along. They don’t need to be left behind. 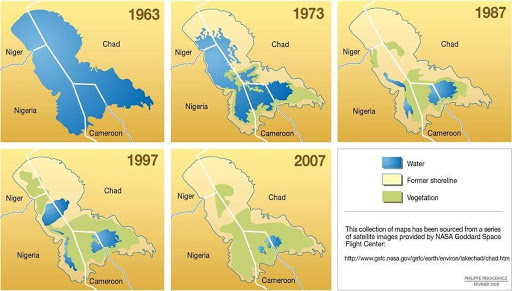 [Taken from: Medium, The Indispensable Lake Chad by Oladosu Adenike]

You mentioned briefly about Lake Chad, I wondered if you could talk about the connections between the environmental crisis and women’s rights there?

Yes, of course. There is a full connection between women’s rights and the environmental crisis in the Lake Chad region. Lake Chad is bordered by Chad, Nigeria, Niger, and Cameroon. So, these four countries are really affected and the countries that are connected to them. This is something I’ve been fighting for quite some time now because I have seen it.

The women affected are home keepers for their families. They have to go a distance to get water. They can be sexually assaulted in the process of trying to go distances to get this material. They can be raped. It can affect their educational rights because they have to drop out of school to meet their family needs. All of these issues are linked to women’s rights in environmental instability. These issues really need an ecofeminist approach – if it is not an ecofeminist-centered approach, it’s going to fail.

We need to keep talking about it and keep taking action on it. Lake Chad is one of the worst humanitarian crises according to the UN because it is faced with a whole load of crises from food insecurity to drought to displacement, refugee issues, and other kinds of insecurity that are exacerbated by conflict. In this conflict, women pay the price because they can be used, they can be sexually abused, they can be kidnapped for ransom. It’s the women who are vulnerable to all of this so we need to keep making them centre-stage.

In terms of the global conversation around climate justice and feminism, what insights do you feel you bring as a Nigerian activist?

As an ecofeminist, I’m the first in Africa. I hadn’t seen someone pioneering ecofeminism. So, I decided to start that.

Women are disproportionately affected by this climate change crisis and our voices need to be known. Our voices need to be brought to the limelight for global action. We are talking to leaders about the increase in rape, the increase in other forms of violence against women like the abduction of school children. If we don’t bring it up for global action, how will people know what we are passing through?

I also criticize the fact that women are not focused on [when talking about] the environment. And we can’t talk about women and gender whilst leaving the environment behind. The environment has a big influence. If you look at the ranks of countries when it comes to gender equality, those that are doing well are all Nordic countries. African countries are left behind because we have so many environmental issues to deal with. We have the shrinking of Lake Chad, we have armed conflict arising from climate change, we have flooding increasing from rising sea levels, food insecurity.

Our tradition and norms can be a factor that is impeding us but we can call for global movements for all traditional leaders to change their perception towards female children. It is ridiculous for a fourteen or fifteen-year-old girl to be married out forcefully – it’s going to affect our rights in various forms. Looking at the fact that in some of these communities they’re all farmers. So, when their farmland is flooded or they face droughts, the female children suffer for it as a form of survival strategy. They are either given out forcefully to marry because they need a bride price to use for the family or the female children go hawking [children carry goods on their head to sell on the street by foot, in order to get the door to door deliveries]. It places them at a vulnerability. Everybody is vulnerable to climate change but it is gender-sensitive. We can’t attend climate justice without having justice for women’s rights – it goes hand in hand.

When we are having climate justice action we should include women in it. When we are having UN women meetings then the environment should not be left behind because it has a great influence. So, these are primary themes I’m showing here in Africa. For us, also to meet our fellow countries’ rank in attaining gender equality together. Women don’t have the rights to own land to a certain extent due to some traditions and this is going to affect our food security levels. There’s a whole lot that is happening in Nigeria and some parts of Africa that we need to keep spotlighting for global action. 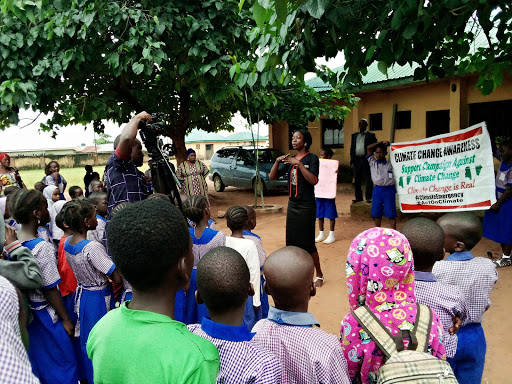 It differs because, at their rallies in the UK and the US, they’re massive rallies but when it comes to Nigeria it’s usually small because our laws and the way we do things don’t permit for such massive rallies. It’s [also] going to attract another group of people, like, how can I say, a terrorist group, they might barge into it and it would become another protest, not the protest that you were thinking of. So, organising protests here is money-intensive because you need to pay for security, for so many logistics to do this kind of massive protest that we are seeing in other European countries, the US, UK…

We are still trying to get as many people involved and to illustrate to them what climate change means and how we can get action against it. So, we just localise. I go to schools because in schools there might be thousands, there might be hundreds, and social gatherings, religious gatherings, public places. That’s where we can have a peaceful form of climate action without any intruders and successfully inspire people for a change of mindset and greater sustainable solutions.

Can you tell us a bit about the “ILeadClimate” movement you have created?

The ILeadClimate is a future form of action ready to involve as many people – a Pan-African movement – that is going to bring us to other European countries to draw their attention.

We are fighting for what is affecting Africa the most, like the shrinking Lake Chad- something that’s leading to armed conflict. The UN Security Council has called for the need to address the climate-related risk leading to the conflict in the Lake Chad region but first, the UN Security Council needs to accept the fact that climate change is a security issue. The ILeadClimate movement is also placing gender equality at the center of this.

It’s also talking about environmental news. We don’t really have a spotlight on all of these issues that are happening in Nigeria in Africa. We do a lot of things on climate action that is African-based that will make people see what is happening and how they can get involved like disarmament and a global call for ceasefire.

The carbon is another form of gun to the environment – it’s leading to loss of life, and property. The flooding, it carries away people’s houses, it carries away people, and it leads to extreme poverty and food insecurity. So, how do we achieve disarmament? What are the ways forward? How do we achieve the nine-point agenda for the regional stabilisation in the Lake Chad region? How do we achieve the twelve-point agenda for the great green wall initiative? These are things that the ILeadClimate movement is focused on. It’s a Pan-African based movement. So, we are looking at issues that matter to us within this crisis to foster the action needed.

Who or what inspires you?

What inspires me is the fact that everyone deserves a livable future. Becoming a climate activist, I don’t see it as a choice. I see it as a necessity and a call from my society because these are issues, pressing issues, that are affecting us.

Most of the things that inspire me are that: there are millions of people that are in a state of poverty, food insecure, displaced or refugees in other people’s countries. This is not a choice for them. It is a force that is in place by climate change due to environmental instability. These people inspire me to keep fighting for them. Their future matters as much as my future matters. We all have a shared responsibility on this planet to keep fighting and see that we win and win for others whose voice has not been heard. And we can fight through our voices.

Thank you, it’s amazing to hear your perspectives and about your work. Thanks so much for speaking with me Oladosu.

Oladosu Adenike’s latest article ‘Why We Should All Be Ecofeminists’ published at Planet Shine can be found here.