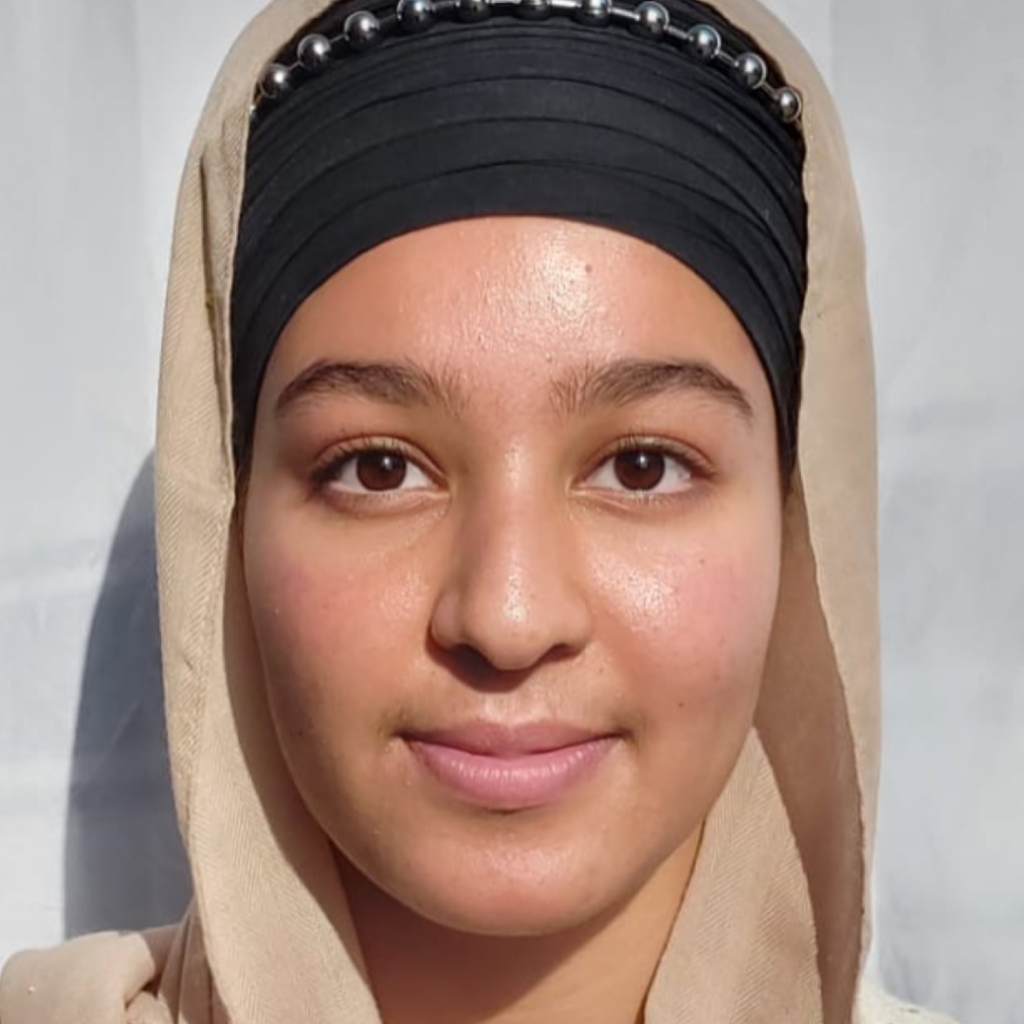 Simran was born brought up in Glasgow but has strong ties to Punjab as both her maternal and paternal grandparents are Punjabi Sikh immigrants. Simran has recently started studying Economics at University of Glasgow, but environmental issues are an important part of her life. Coming from a family heritage that has strong roots in organic farming for livelihood, she has a personal and emotional connection to environmental sustainability with regards to our food systems. In this current climate when Indian farmers are being exploited through continued unjust legislation, we must not only raise awareness, but stand with them as their livelihoods affect us all.

Simran’s project, as part of the Climate Sisters project, involves looking deeper into the consequences of government legislation to organic farming in India, and its wider relation to environmental sustainability. She has developed an environmentally friendly piece of art that represents her view on this topic by creating 12 panels, one for each month of the farmers’ protests.

Simran believes the Climate Sisters project has been a wonderful and exciting platform to give young, diverse, aspiring artists like herself; a young, Sikh, South Asian girl. She hopes for her artwork to be displayed in public settings so that she can raise awareness of social justice issues linked to the climate crisis. Simran is also currently setting up a studio and website to create and promote her upcoming artwork.

What initially drew you to the Climate Sisters initiative? Why did you apply?

It was something very new and exciting – I’d never done anything like this before. I’d never been able to do anything creative and artistic with school, so I thought it was a really exciting opportunity. Obviously COP26 was happening here in Glasgow, and I wanted to be a part of it, and I thought this was a really good way to get involved.

Your creative project involves looking deeper into the consequences of government legislation to organic farming in India, and its wider relation to environmental sustainability. Could you tell me a little bit about your project, and why you chose to focus your creative project on this topic?

I’m Punjabi – my grandparents are from Punjab – so we have really strong ties there still. So in mid-2020, the Indian Government passed some laws unlawfully – it was an overnight kind of thing – and what they meant was that the Indian farmers couldn’t get a minimum price for their crop. They sell their crops back to the Government, which exports them from there. Before then, they’d always had a minimum guaranteed price no matter what, but this law meant that the Government could get them for pennies. It was already pennies, but this was even more so.

That’s when the farmers started protesting. It has been called the largest protest in human history – but there was a lack of media coverage of it globally, considering that it was such a big social movement, and there were protests happening across the world in support of it – in Scotland, England, the US, and Canada – it was huge.

I wanted my project to highlight that. I knew that people from around the world would be at the COP26 conference, so I thought this would be a good opportunity to highlight something happening under everyone’s noses. Not many people know about it, but it affects us all, because India is one of the world’s biggest exporters of wheat and other staple crops. There was a slogan, “If you ate today, thank a farmer”, which I thought was really true. There wasn’t enough coverage of it, so I wanted to focus my project on it.

“This is the first project I’ve ever done, and to start off on such a big scale has been an honour. It definitely has given me the chance to think more about how my art can impact people, and how I can raise awareness and have a voice through my art. I definitely want to make more meaningful art.” 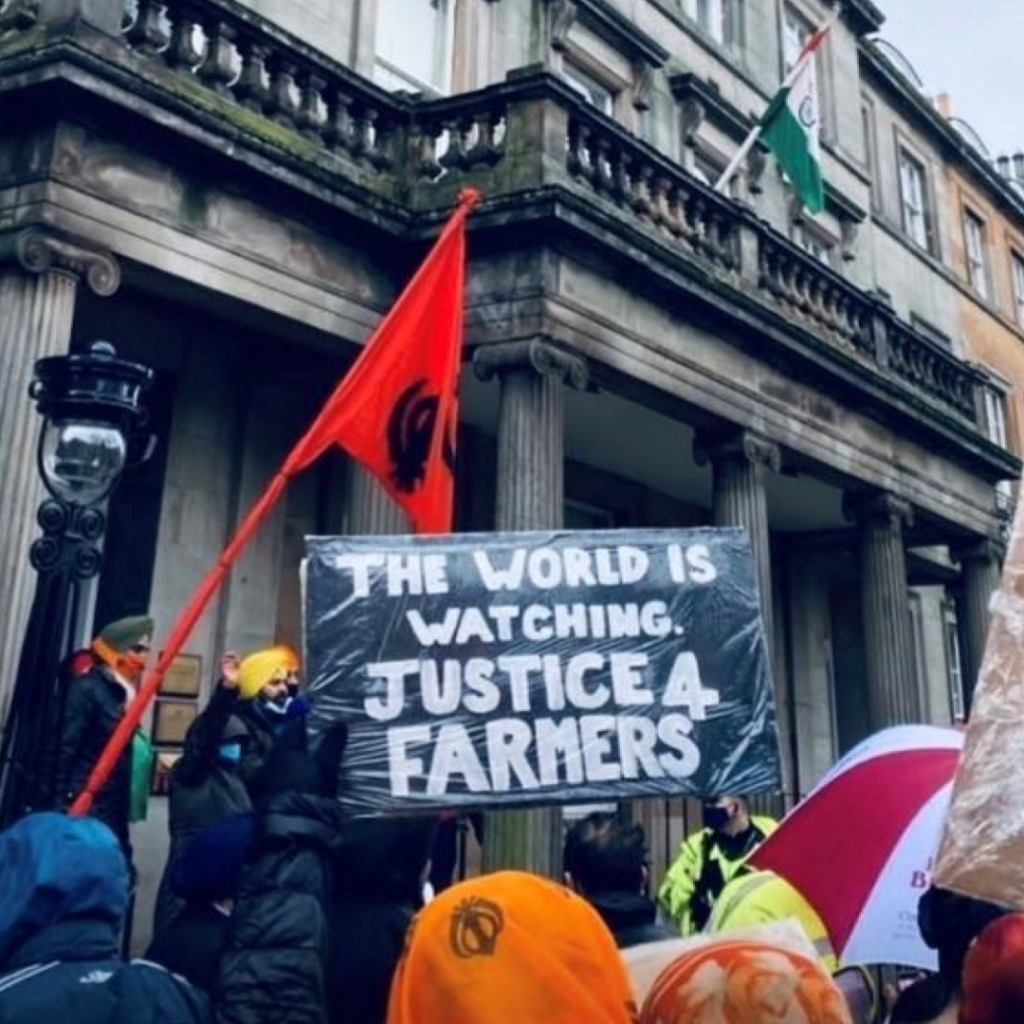 A protest in Edinburgh in solidarity with Indian farmers. Photo Credit: Simran Kaur.

The Climate Sisters initiative used to be called the ‘Local Women of the World’ initiative. What does this mean to you? Does this resonate with you?

Yeah. A lot of the time, for women of colour here, and for refugees and immigrants over here, they feel like they don’t have a voice in this kind of issues. People just expect them to be grateful that they’re even here at all – there’s a sense of being a ‘white saviour’ – like ‘you should be happy with what you have’. But just because we’re here, we also have a right to talk about this kind of stuff without a fear of persecution or receiving hate – that’s why it really resonates with me. This initiative has given all of us women a platform to talk about different issues that affect us as women of colour, as immigrants, as refugees.

Could you tell me a little bit about your creative project itself? Why did you choose the format you did to raise awareness on climate change and food systems issues?

I wanted to raise awareness about the impacts of these laws on the farmers themselves. I got 12 wooden boards – to represent the 12 months of protests – and got household plastics and cut pieces up and superglued them on, and spray painted my design over it. I used household plastic because a lot of our fruits and vegetables come in plastic containers, but if you look at the Global South, where these products are coming from, they’re actually very sustainable. So between the Global South and us, there’s an issue there in terms of plastic use – it’s such a waste. It definitely made me think about how much plastic we use as a household.

My design was aimed at making a statement. Not everyone is going to like the design, but it’s definitely going to make you look! So I feel like I’ve done my job – a lot of art is just nice to look at, or feels ‘safe’ – but this is the first time I’ve ever done something that is not very ‘safe’. 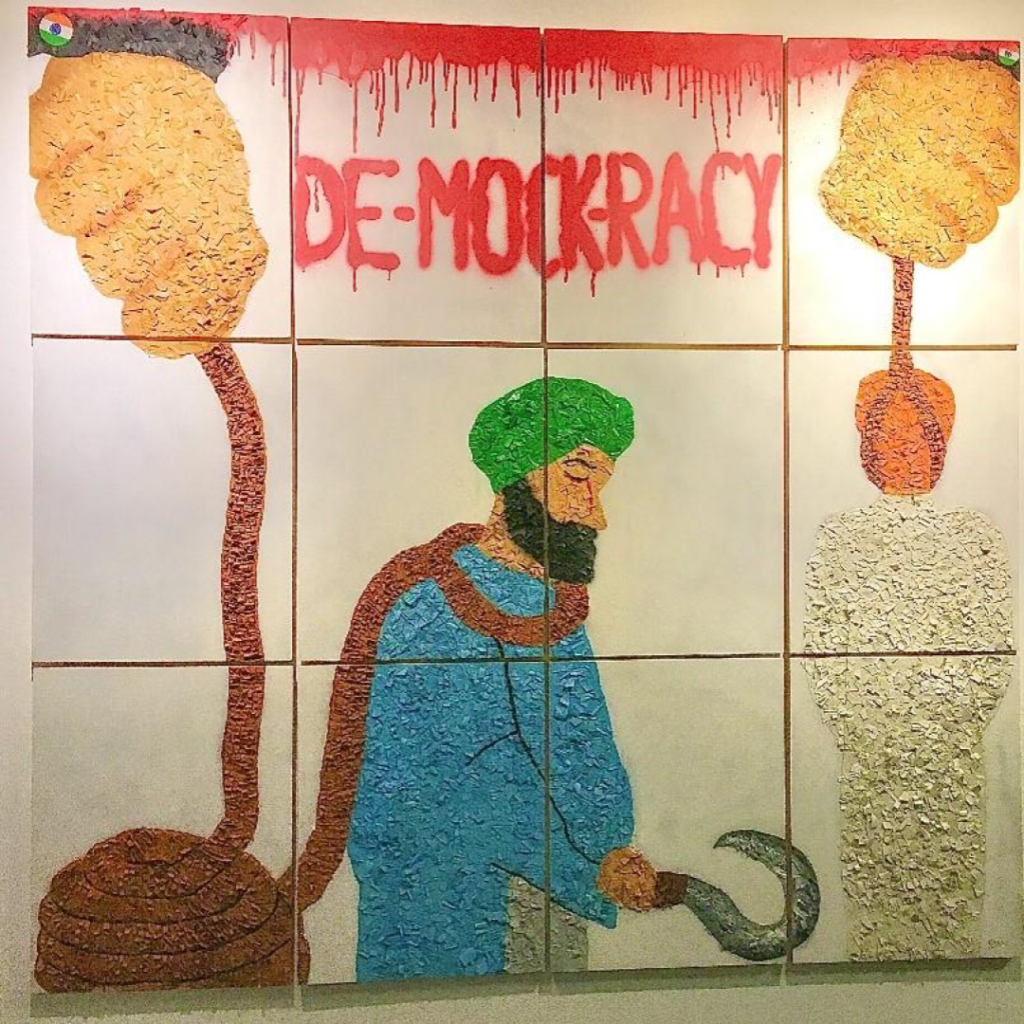 “I want to work on my art on the side and think more about what I want to do with it, because I do have a voice and I want to use it.”

Could you tell me about how the Climate Sisters initiative helped you? What did you learn from the process?

I had a mentor, so I learned to collaborate more. The art I’d done before was all by myself. It was also really interesting to learn about everyone else’s projects. We had fortnightly meetings, which was really good, because we heard everyone else’s updates, and about the issues they wanted to highlight in their own projects. We could all come together and celebrate together too, and we collaborated by supporting each other in that way.

What was the highlight of the Climate Sisters initiative for you?

I don’t know, there were so many good bits! It’s still going too, that’s the best thing. Probably the first time I met the other Climate Sisters, at a women’s conference at the Pierce Institute – it was great to see everyone face-to-face and see everyone’s projects in real life.

Is anything else coming up that you’re looking forward to?

We are having an exhibition at the Glasgow Science Centre. The event organisers want to build a ‘Climate Tower’ – they started them at the COP26 conference, but they want to keep the conversation going about sustainability. They are building a rotating tower with each of our projects on it, with blurbs, and a website you can access via a QR code. The exhibition is opening on 22 April. Nicola Sturgeon is coming to this one! It’s so exciting.

You’ve already spoken a little about this, but more broadly, why do you think the Climate Sisters initiative is important?

Without meaning to, the talk about sustainability is quite focused around white people. There’s quite a lack of diversity in general within the subject – there are quite a few people of colour working in the field, but they’re maybe not spoken about enough. This is a gap that the Climate Sisters fills – including women who are from varying cultures and backgrounds. I’ve learned so much about different cultures already just by meeting these women!

It’s also about giving people who are from not-so-privileged backgrounds a voice. To even be able to participate in this discussion is a privilege in itself and a privilege that not many people have. Maybe people who have just settled into this country, or for whom English isn’t their first language, they haven’t had a chance to do that. They may not have had access to the education either.

Education was an important part of the Climate Sisters initiative too. During our meetings, we had experts from different fields within sustainability come in and educate us about different topics, for example, on sustainability within the fashion industry. I didn’t know a lot about this before the project started, so it really educated us a lot.

What’s next for you, in terms of your study and your creative work?

I’m studying economics and sociology – it’s very different from the art that I love – but art’s my passion and it always has been! Creatively, this has been really good for me. This is the first project I’ve ever done, and to start off on such a big scale has been an honour. It definitely has given me the chance to think more about how my art can impact people, and how I can raise awareness and have a voice through my art. I definitely want to make more meaningful art. I’m actually setting up a studio at the moment – it’s just in my grandpa’s garage – but I want to work on my art on the side and think more about what I want to do with it, because I do have a voice and I want to use it.

EVENT: WHAT WOULD FEMINIST CLIMATE JUSTICE LOOK LIKE FOR EVERYDAY LIFE? Join the conversation at this exciting event at 6pm on the  30/6/22, exploring what a feminist approach to Climate Justice would look like. Speaker panel, exhibition and live performances by the Climate Sisters and delicious street food. Book now