Feminists have been thinking about the relationship between nature and people, and between gender inequality and the environment, for decades. There are many different feminist perspectives on the environment — including but not limited to ecofeminism, Black feminism, feminist political ecology, postcolonial feminism and intersectional feminism. Wen is guided by feminist values, and welcomes a range of feminist viewpoints. This blog is part of a series exploring the diverse feminist perspectives of different activists and theorists on environmental issues. 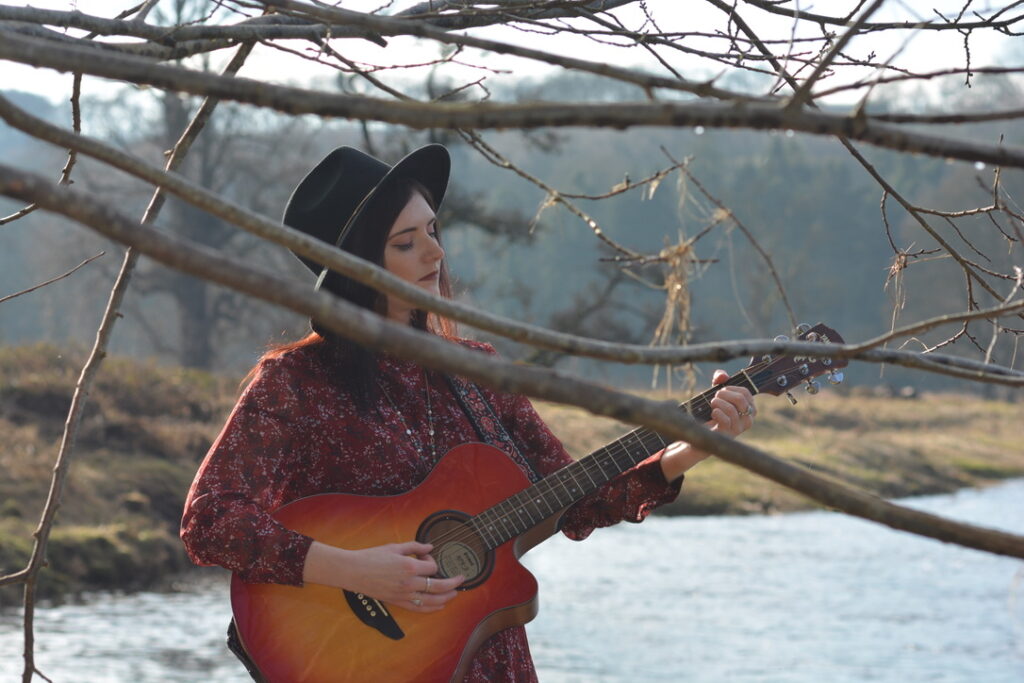 Amanda Bogle is a 25 year old musician from Scotland who for Wen’s Climate Sister’s project wrote a song and created a music video on climate change issues. Growing up in the countryside surrounded by nature she always had an appreciation of the beauty of the Earth and need for its protection. Amanda’s passionate about sustainability, recycling and reducing waste and has worked for Gilded Lily women’s project since 2019. She started playing professionally under the stage name ‘Sadie Marie’ (a mash up of her mum’s and gran’s names) since 2015. Her song “This World is on Fire” created on the project is her first song on climate change with credit to her Climate Sister’s partner and mentor Zhanna Kugotova whose incredible talent helped make the music video as professional as it does.

Wen’s Climate Sisters work brought diverse women’s voices to the environmental decision making stage at COP26 in Glasgow. At a fringe event, the Climate Sisters Conference, two climate sisters groups from Manchester and Glasgow presented pieces of creative work they had developed over their projects that showed their voices, feelings and perspectives on climate change. Amanda shares a bit about how she got involved and her experience in the project.

Can you tell me a bit about yourself and how you came to be involved in the climate sisters project?

A bit about me… so I’m a musician.  I’ve been playing music and writing songs since I was 14. I also work for Gilded Lily, a women’s organisation based in Glasgow. The reason that I became involved is because of Gilded Lily. I started working here and they had this climate leadership programme about how to become active in climate leadership, learn more about climate change, what’s happening and what we can do to help.

The climate leadership programme then led to Climate Sisters. Zarina Ahmad (the project lead) thought the group of women she’d met had really good ideas and we’re really passionate. So she wanted to do a project with us for COP26 and that’s what the Climate Sisters ended up being.

Can you share a bit more about what your workplace Gilded Lily does?

Our shop is a safe space for women to come to. There’s crafts, workshops, a drop in to have a chat and a cup of tea, enterprise workshops to help women start up their own businesses, cooking classes. We’re based in Glasgow but we have women that come from other parts of Scotland. We work with a lot of refugee and asylum seeker women but all women are welcome.

We’re also really involved in environmental projects. We did a project called Waste into Wishes with funding from the Climate Challenge Fund that enabled us to put on workshops focused on upcycling. We did sewing workshops where women learned how to make their own clothes from old materials instead of buying new. We did a cooking course with donations from supermarkets of food that was going out of date or wasn’t going to sell. At the end we did a fashion show where we showed off the clothes that the woman had made from their own materials. It was really great. They made some really amazing stuff. We’re all about reducing waste in all of our crafts as well. We use that ethos. 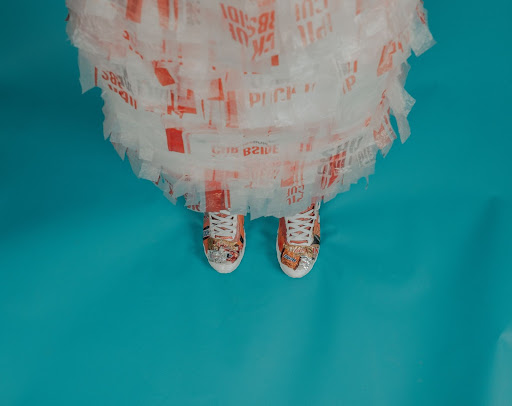 Photo by Noah Buscher on Unsplash

How does your work as a musician relate to what you do as a climate activist?

Zarina said to me, I think it would be good if you did this for a COP.  And I was like, okay! It took me a while to properly write a song. It was the first time that I’d come up with a song to do with an issue but I wanted to do it. I knew how to put my point across through my music. I knew I wanted to do a video as well because that would also help to give people a visual representation.

Because of the work I do with Gilded Lily I wanted my song to be about the impacts of us buying lots of stuff here in the West which I’ve learned about  through the women that we work with. One of the women in my music video, Susie, is a woman who comes to our workshops. She’s holding up her jewellery that she makes with single use plastic. She was telling me that the beaches where she’s from in El Salvador are just covered in litter. Other women told me that lots of our waste ends up in their countries. We don’t really think about it. I didn’t until a few years ago. I really started to think, where is all this stuff ending up? 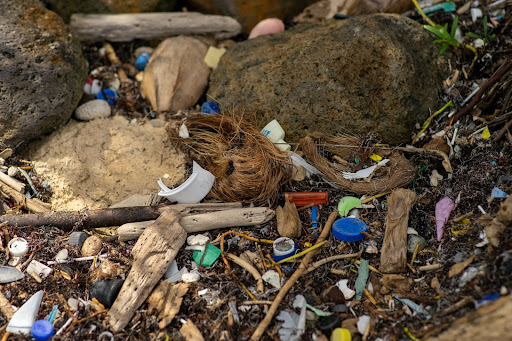 “Women told me that lots of our waste ends up in their countries. We don’t really think about it”

Hopefully people can think about what the lyrics are about. There’s images of some of the bad stuff, the litter in Glasgow and then there’s Susie with her jewellery. That’s a way to say that people are doing stuff to try and combat this.

Now, I would like to become more involved as a songwriter in raising awareness of issues. I love doing it. I’ve wrote a feminist song about being a women and I’d like to involve the women I work with in that because they’re all amazing. That’s how I want to use my music.

Amanda’s song, ‘This World is Fire’

What was it like being on the Climate Sisters project? Any challenges, high points?

As I said, it was pretty challenging at first to write a song about climate change. I didn’t want to be too preachy. What actually helped me get started was my friend Papa used to write poems and he had a poem about climate change. So I used some wee phrases he wrote. He wrote that poem in 1995 so it just kinda shows you he was thinking about these issues back then as well.

It was good because the women from the Climate Sisters hadn’t had that experience before. They really enjoyed being filmed and being a part of it. It was really great and it still is! We’re still doing things. We have the exhibitions and I’ve been involved with them.

There were no bad parts. It was lovely as well because the women from the project in Manchester came up for COP and it was really great to meet all of them. We had a celebration event altogether. It was just so nice. And it’s really nice to be around really supportive and positive women. It’s nice to support each other.

“It was really great and it still is! We’re still doing things.” 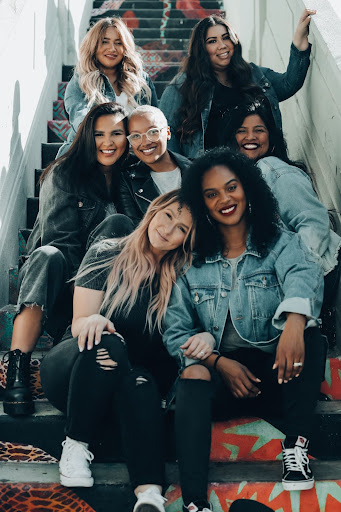 Photo by Joel Muniz on Unsplash

How do you see the links between climate justice and feminism?

I guess, you know, women’s voices and climate change. COP kind of showed that was an issue. There was a severe lack of women’s voices there. It was also quite upsetting that there wasn’t the invitation for people from the Global South to be speaking at COP. In terms of feminist issues, I don’t know if I know enough but just the fact that women are predominantely more affected by climate change and there needs to be more women’s voices. We’ve seen at COP – it was just mostly rich white guys in suits walking around at Glasgow.

“Women are predominantly more affected by climate change and there needs to be more women’s voices. We’ve seen at COP – it was just mostly rich white guys in suits walking around at Glasgow”

You’ve come into this journey and are passionate about it, writing songs that inspire others. What is it that inspires you?

That’s a good question. Sometimes, it can be quite hard when you hear the doom and gloom. What inspires me is working with the women. Even though some of them have very little, they’re still trying to make an effort and help in any way that they can.

​​I really hope the song makes people think about the throw-away culture that we have adopted and to instead move to upcycling and using what we already have. I hope that the video conveys how much “stuff” we throw away and how there is no need for the amount of rubbish in landfills. The majority of the song and video is quite doomy and gloomy with images of litter all around Glasgow. However, for the end of the video we wanted to bring a sense of hope which is why we included shots of some of the Climate Sisters holding up their artwork and particularly focusing on Susy creating her upcycled jewellery made from single-use plastic. The women involved in the Climate Sisters project amaze me and really inspire me to carry on, I knew from the start that I wanted to involve them in the video so that others could see their work.

Thank you so much for speaking with me Amanda!

Louise Turner is a PhD student at The University of Manchester and volunteer at Wen. Her PhD title is: ‘Achieving Net Zero in the Water System: diverse pathways to low-carbon demand’. The research is using a social practice perspective to examine how net zero plans in the water sector connect to people’s daily patterns of water -use. This seeks to inform how we can collectively use and live with water differently and more sustainably in the future in response to climate change.

EVENT: WHAT WOULD FEMINIST CLIMATE JUSTICE LOOK LIKE FOR EVERYDAY LIFE? Join the conversation at this exciting event at 6pm on the  30/6/22, exploring what a feminist approach to Climate Justice would look like. Speaker panel, exhibition and live performances by the Climate Sisters and delicious street food. Book now