It’s become the norm to feel powerless amidst the climate change headlines.  Knowing that somewhere, over there, other people are making decisions that will affect all of our lives and the future of our children.

And even more so these past two weeks as activists, delegates, political leaders, interpreters, journalists, and police descended on Glasgow for COP26, along with the Wen team. With so many groups in one place the phrase “worlds collide” springs to mind, but in reality, it felt more like being worlds apart.

There was little sense of overall ‘togetherness,’ despite the government slogans. Even on the train to Scotland we were reading about catastrophic failures of access and inclusion, with indigenous groups and grassroots communities of the Global South having little official representation & POC activists being excluded from COP due to vaccine apartheid”, changing travel rules, extortionate travel costs and Britain’s hostile immigration system.’

The lack of gender equality was also getting attention. According to She Changes Climate, just 7% of the people that made up heads of delegations at COP26 were women.   “Not once in 26 years have women made up at least 50% of the people at the negotiating table for international climate conferences” said Bianca Pitt, co-founder of She Changes Climate, which is calling for equal representation at the top levels of all future climate delegations.

“Not once in 26 years have women made up at least 50% of the people at the negotiating table for international climate conferences” – Bianca Pitt, co-founder of She Changes Climate

The divisions continued as Heads of State and official delegates were ferried to the ‘Blue Zone’ while civil society groups were mainly relegated to the ‘Green Zone’.    Access to the Green Zone was via a long trek from the bus stop across an unwelcoming car park, with lots of curbs which were annoying for us and our little trolley, but would have been even more frustrating for anyone with mobility issues.

Fortunately once inside the Green Zone, we were on a high as our Feminist Green New Deal stand was drawing attention and we caught up with Anna and Sara from the Women’s Budget Group (WBG) who Wen is working with on the project.

“We want to remind policy makers, delegates and climate activists  to consider the needs of women and marginalised groups in their climate policy planning. We want to see a new green economy that puts care at the centre.” explained Anna of the WBG. 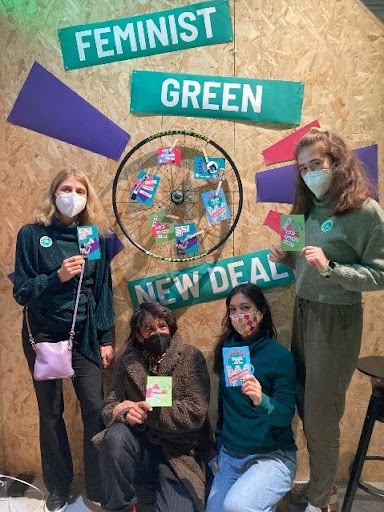 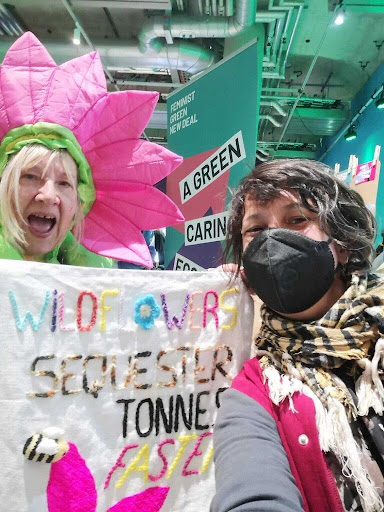 We invited people to fill out their feminist visions for the future and learn more about the Feminist Green New Deal. 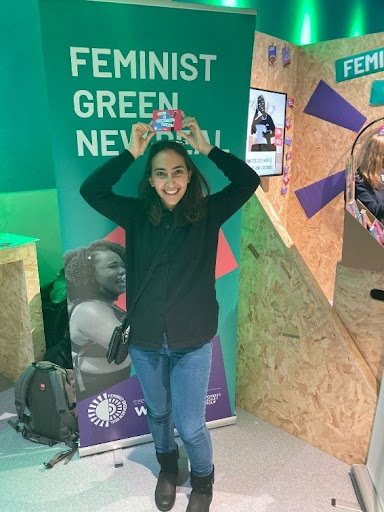 “My vision for a green, caring and safe world is…

A world with justice and socio-environmental rights, where we care more about life and less about money”  – One of the many feminist visions collected on our stand.

Nearby there was a large screen broadcasting live from inside the Blue Zone; but as ever it felt like we were on the outside looking in.

Meanwhile, our friends from women’s groups in  London, Birmingham and Manchester were en route to Glasgow! 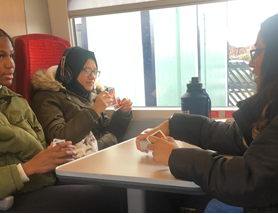 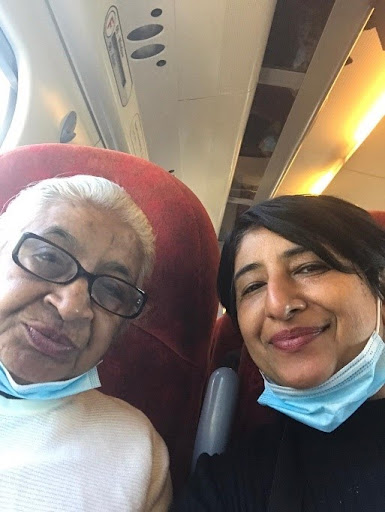 Thanks to funding from Lankelly Chase, Joseph Rowntree Charitable Trust, CARE International and Polden Puckham Charitable Foundation, Wen was able to support four community groups from across the UK to come to COP26 as part of the Feminist Green New Deal and Climate Sisters project. These were:

While the groups were on the way we headed down the road to prepare for our first fringe event which asked the question: “Why do we need a feminist approach to the tackling the climate crisis?”. This was the first time Wen had live streamed an event on Zoom so we were a bit nervous.  Sadly one of our speakers, Dominique Palmer, climate activist, was unable to attend – but we later found out she’d been invited to speak alongside Greta Thunberg!

Our other speakers were: Zarina Ahmad, Dr Sherilyn MacGregor, Kavita Naidu, and Sascha Gabizon chaired by Anne Karpf, who collectively did a fantastic  job of explaining why a feminist approach is crucial.

“The 22 richest men in the world have more wealth than all the women in Africa.

Women and girls put in 12.5 billion hours of unpaid work each and every day, a contribution to the global economy of at least 10.8 trillion a year, more than 3 x the size of the global tech industry. Women and girls are the among those who benefit least from today’s economic system.

Unpaid care work is the hidden engine that keeps the wheels of our economies, businesses and societies moving.

It is driven by women who often have little time to get an education, earn a decent living or have a say in how our societies are run and who are therefore trapped at the bottom of the economy.

This is all happening because of a patriarchal, colonial, white supremacist and neo-liberal world order that continues to push us into compounding crises”.

You can re-watch the whole panel discussion here.

Saturday morning saw Global Day of Action marches erupt onto streets across the UK and beyond – it was a welcome catharsis of colour, energy and emotion in response to the dreary news coming out of the negotiation rooms. Arriving a little late and rain-swept we quickly found the Feminist  bloc, unfurled our Feminist Green New Deal banner and marched into the centre of town. There was something magical in the air as the wind sent flurries of autumn leaves all around us and momentary bursts of sunlight gave birth to rainbows. 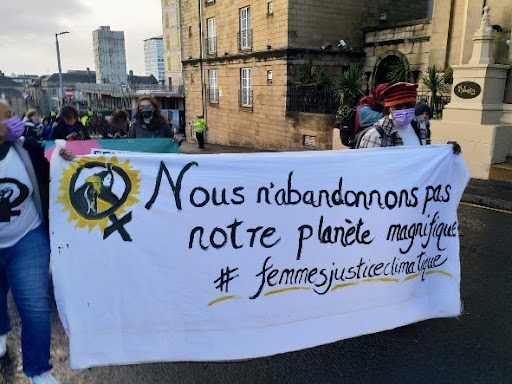 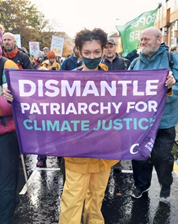 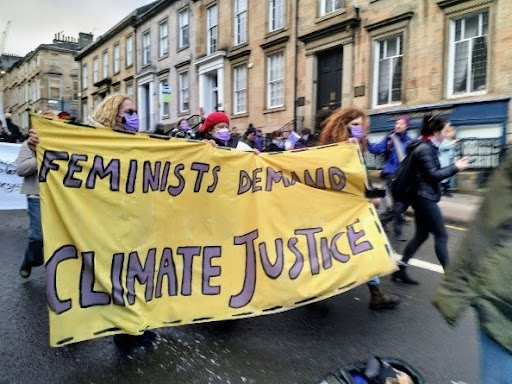 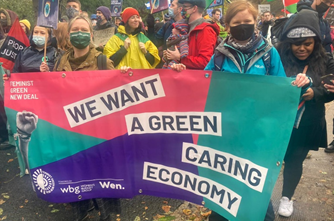 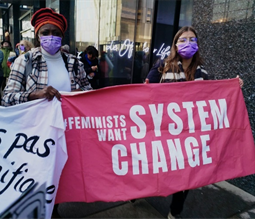 Just as we were about to leave to get to our next event, we heard shouts of ‘feminists!’ and realised we were amidst the Women & Gender Constituency, a boisterous band of international grassroots feminist organisers (part of WEDO – Women’s Environment and Development Organization) of which Wen is a member. Twitter commentators concurred that they had the best protest songs of the entire march. Their passion and tunes were infectious and we ended up staying much longer than we expected. You can follow their brilliant work here: @WGC_Climate

I hear the voice of my great granddaughter

A jaunt across Glasgow and we arrived at Whiteinch Community Centre for the Climate Sisters Conference, the culmination of Wen’s partnership project over the past 6 months. The space had been beautifully transformed to showcase the creative pieces that the women from Oldham and Glasgow had been working on; their unique responses to the climate crisis. Many of these women had connections in parts of the world where the impacts of climate change and environmental degradation are acute.

“Climate Sisters is about discovering more and building our knowledge around the climate, about confidence and what message we wanted to bring to COP26 to inhabit in these kind of political spaces” – Roshini Thamotheram, Wen 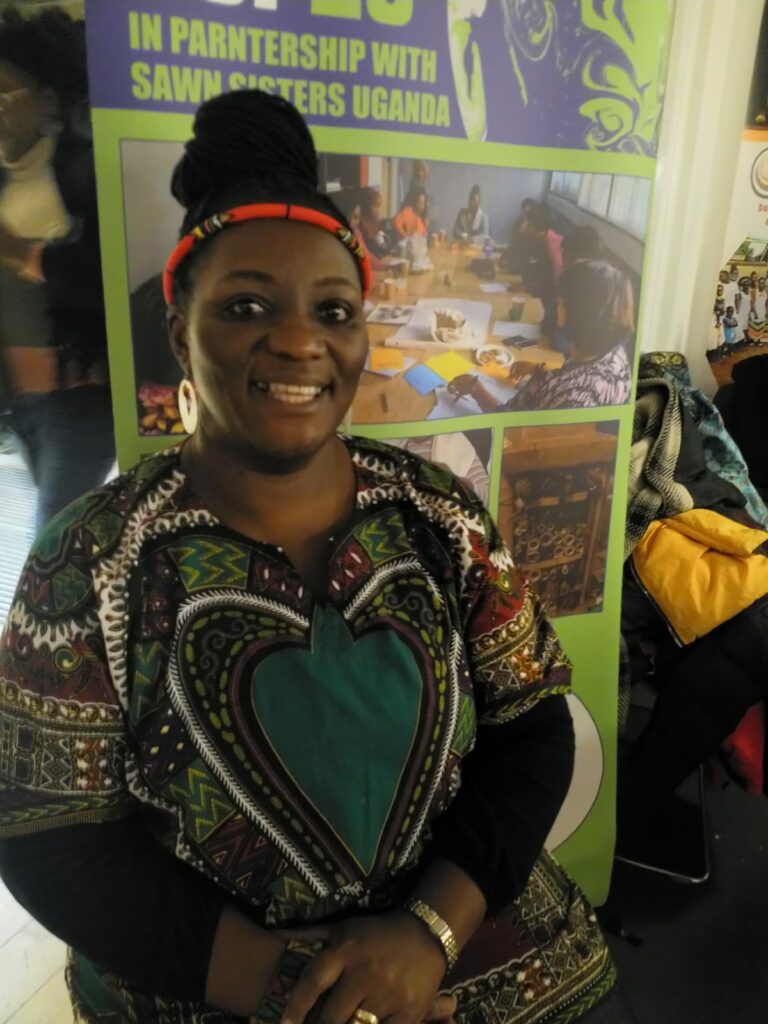 “Most of us come from Africa, which is the second biggest continent, but one of the most affected by the climate issues that are going on. Our emissions are just 3% [of the world’s carbon emissions] , but we suffer the most. So the projects we are trying to create are linking us with our sisters back in Africa” – Rose Ssali, Chief Executive of SAWN (Support and Action for Women’s Network) in Oldham

After break-out discussions on climate change, Zarina had us chanting “We are one”, reminding us of our shared connection. She then invited audience members to stand up and say these words in their mother-tongue. It was beautiful to hear this simple and powerful phrase repeated in so many different languages and dialects. It was as if the whole world was in the same room. 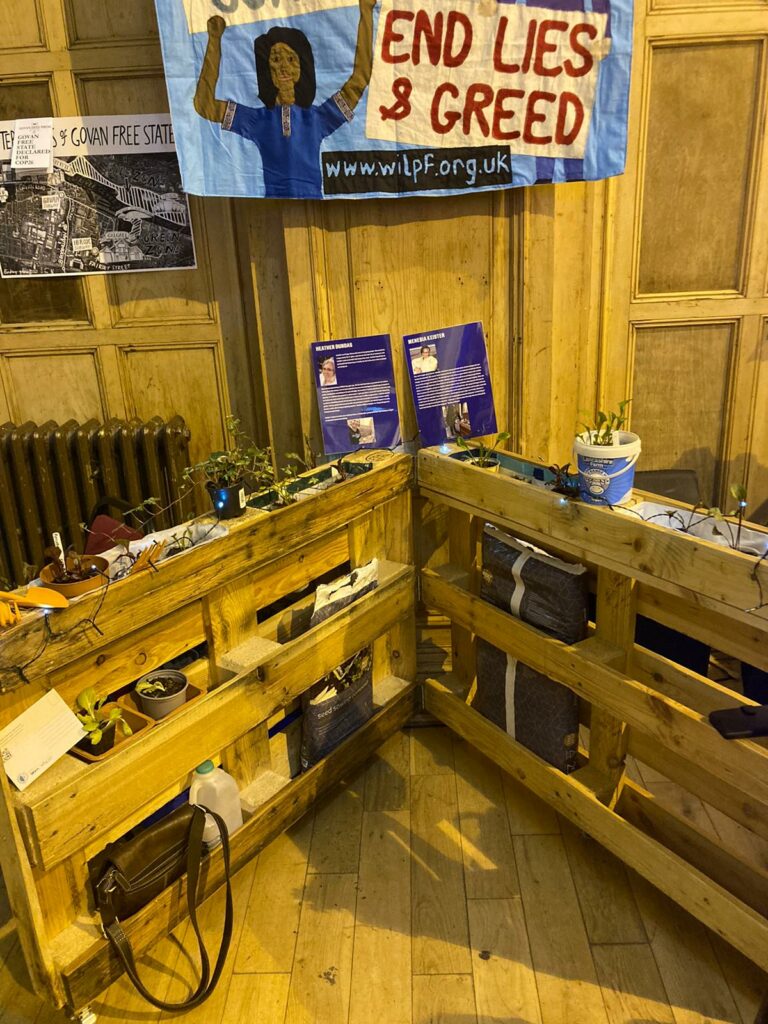 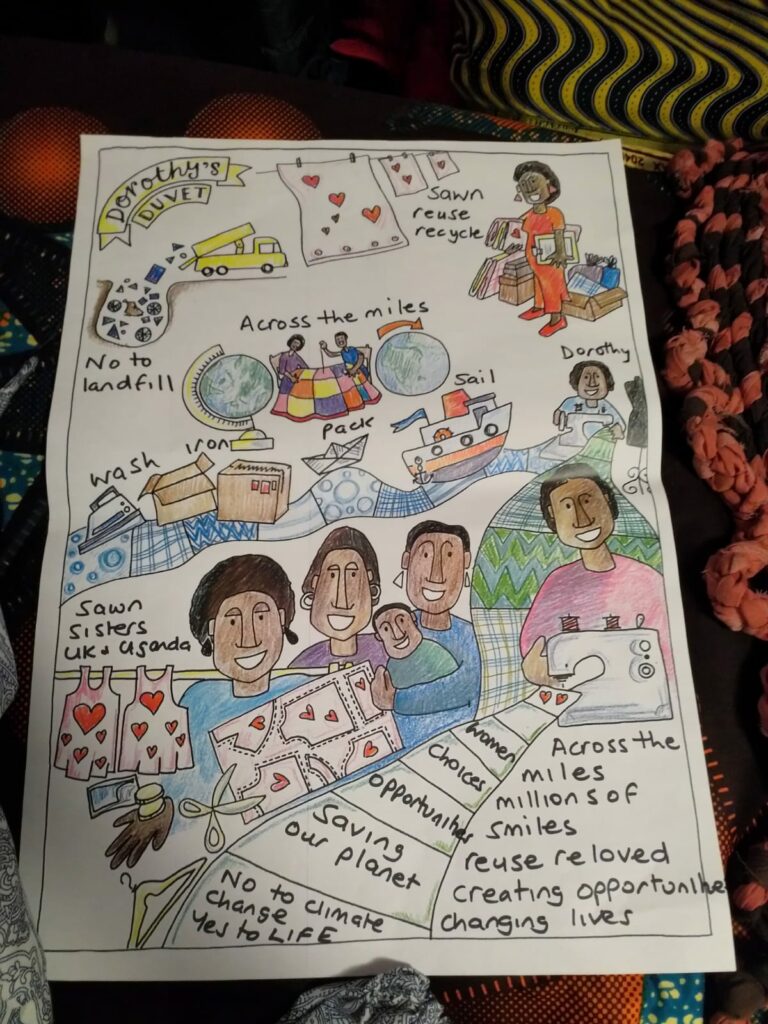 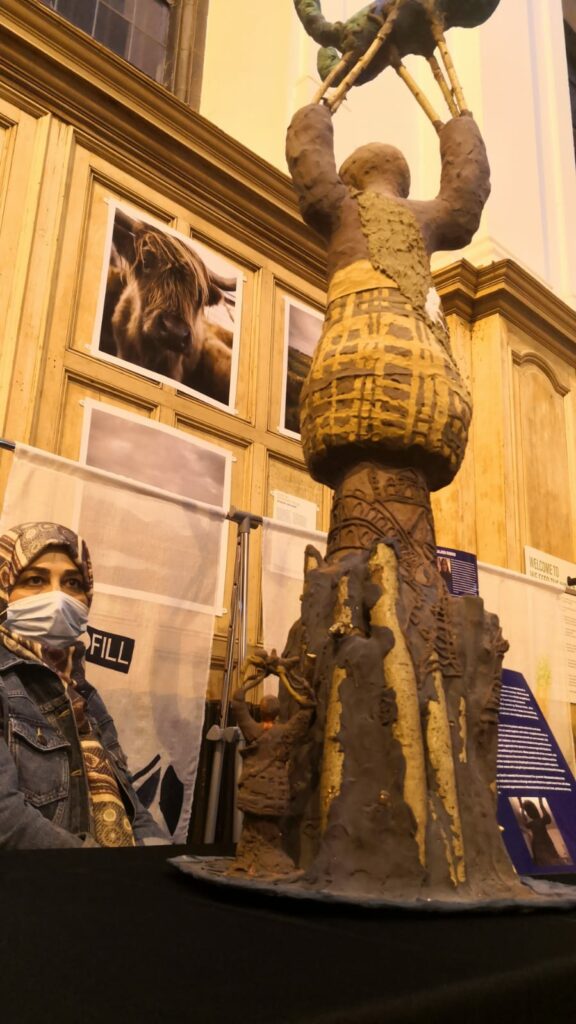 The evening closed with a song called ‘Super Woman’ led by SAWN. It started with two people but it wasn’t long before tables were being moved aside and the whole room was on their feet dancing and singing! It was one of those magic moments that you can’t predict and don’t come along too often!

The evening taught me about the collective power of women when they come together to share their talents and their dreams for the future. I realised that we don’t need to be experts if we know our own stories. We don’t need the lingo if we can speak from the heart. We may not have a place at the decision-making table, but we have a place around the fire. Where we don’t have a voice, we know how to sing. And in acts of imagination, solidarity, defiance, creativity and joy, we are all super women.

With thanks to SAWN, Glasgow Climate Sisters, CET, LIC, WBG and everyone that joined us at COP26, and to the Wen team: Roshini, Heidi, Kate, Zarina, Sofia, Jo, Nadia, Elle and Han.

Julia Minnear, Feminist Leadership Facilitator. Julia has worked in environmental organisations for 15 years and is a former Co-Director at Wen. She believes in the power of using feminist and participatory principles to achieve social and environmental justice.

Find out about the Climate Sisters

Read about Be.Green, a programme for aspiring young leaders run by LiC